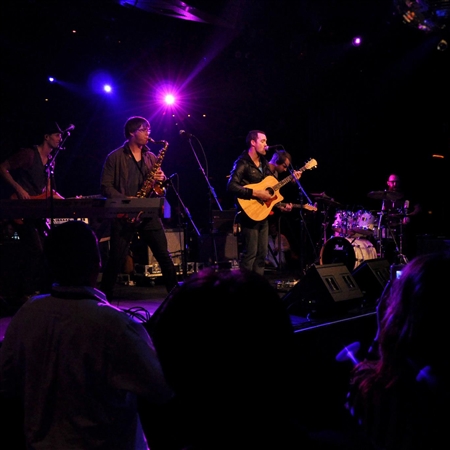 INDIANAPOLIS (May 14, 2014) — Klipsch, a leading global speaker and headphone manufacturer, announces today that it will sponsor Indianapolis-based band bleedingkeys. The new partnership furthers the company’s commitment to the live music experience and sets a precedent for its support of emerging artists that represent the essence of Klipsch.

As a partner, Klipsch will serve as the band’s title sponsor at important performances and appearances. Additionally, bleedingkeys and Klipsch are preparing to shoot a video that will be utilized as bleedingkeys’ debut music video as well as the brand’s primary video for an upcoming product release.

“We’ve been fortunate to work alongside bleedingkeys and share their talent with our employees, customers and brand fans,” said Paul Jacobs, President and CEO of Klipsch. “Similar to Klipsch, their passion for what they do is palpable and we want people everywhere to experience it. We are excited to lend our support to these amazing artists as we mark the beginning of what will become an official emerging artists program.”

bleedingkeys released their first CD “Solo Crazy” in September 2012. It was around this time that the band met Jacobs while performing in Indianapolis. Just five months later they were invited to Las Vegas to play at the Hard Rock Hotel & Casino for a private Klipsch concert.

In just a short time on the local Indianapolis scene, bleedingkeys has garnered a dedicated fan base and a growing list of accolades. Evolving into a style that is as intelligent and polished as it is passionate and raw, bleedingkeys has found a way to connect with audiences regardless of demographic. The band is currently in the process of producing and recording their first full-length album, slated for release in the fall of 2014.

Klipsch is no stranger to supporting live music. Today, Klipsch is involved in the sponsorship of Live Nation Entertainment concert venues throughout North America. Additionally, the brand also served as the title sponsor of Kings of Leon’s 2014 Mechanical Bull Tour presented by Klipsch Audio.

About Klipsch Premium Speakers
For over 65 years, Klipsch has designed premium speakers for those who are passionate about great sound. Company founder Paul W. Klipsch started this legacy in 1946, and it continues today with sheer commitment to innovation and delivering the world’s most powerful, detailed and emotional sound reproduction. Today, the brand’s diverse product portfolio encompasses home theater, professional cinema, installed whole-house contracting, commercial, computer speakers, wireless portable speakers and headphones. As one of the first U.S. loudspeaker companies, Klipsch continues to be the high-performance brand of choice for audiophiles and home theater aficionados around the world. Klipsch Group, Inc. is also a wholly-owned subsidiary of VOXX International Corporation (NASDAQ: VOXX).

About bleedingkeys
Comprised of Jeremy Johnson (lead singer), Jon Beaty (saxophone, keys), Jonathan Green (bass guitar), Coty Leffingwell (drums, percussion) and Darren Cooper (lead guitar), the Indianapolis-based band released their first CD “Solo Crazy” in September of 2012. Notably, the project was largely funded by prize money won by their leader singer/songwriter, Jeremy Johnson, after taking the top spot in one of the region’s biggest talent competitions. The band served as a headliner for the Grizzly Music Showcase in April 2013, and was the Plaza Stage opener for Maroon 5 and Kelly Clarkson at Klipsch Music Center later that summer. The band’s first full-length album is scheduled to be released in the fall of 2014.